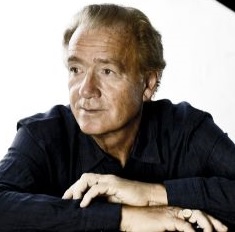 François-Joël Thiollier is one of today’s most complete pianists and musicians. Franco-American by birth he has assimilated the best of several cultures: born in Paris, he played his first concert at the age of five in New York. As a child, he studied in France with Robert Casadesus and distinguished teachers of the Paris Conservatoire. Subsequently, he studied with Sascha Gorodnitzki at the Juilliard School of Music where he obtained both Bachelor’s and Master’s degrees at the record ages of eighteen and nineteen; with top honors and awards in all subjects, both academic and musical.
François-Joël Thiollier went on to win eight “Grands Prix” in international piano competitions, notably the Brussels Queen Elizabeth and the Moscow Tchaikowsky Prizes.
Thiollier’s enormous repertoire (80 concerti), his exceptional musical culture and his extraordinary pianistic command are the key to his international success. He now concertizes in over 40 countries with the leading orchestras, such as the Moscow and Leningrad Philharmonic, the Amsterdam Concertgebouw, the Hague Residentie Orkest, l’Orchestre de Paris, l’Orchestre National de France, l’Orchestre Philharmonique, the Italian Rai, the Berlin Symphony Orchestra etc. He played in famous concert halls, among which the Théâtre des Champs-Elysées and Salle Pleyel in Paris, the Teatro Real and the New Auditorium in Madrid, the Victoria Hall in Geneva, the Accademia Santa Cecilia in Rome, the Milan Scala, the Brussels Palais des Beaux Arts, the Amsterdam Concertgebouw, the Berlin Philharmonie and Konzerthaus, the Sydney Opera House Concert Hall.
Guest of the Berlin Philharmonie, his interpretation of the Busoni Concerto was hailed by the Berliner Morgenpost: «Thiollier, a pianist absolutely beyond compare, stunned and fascinated his audience with his incredible technique, polished elegance, impeccable sensitivity of sonorities and last but not least, consummate unstinting musicianship».

François-Joël Thiollier was named “Officier des Arts et Lettres” by the French Ministry of Culture and Communication in 2003.