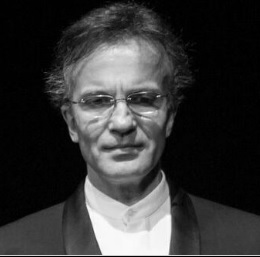 Vovka Ashkenazy, who is of Russian and Icelandic parentage, began piano lessons at the age of six with Rögnvaldur Sigurjónsson in Reykjavík, where his family lived at the time. Ten years later he went to England to study with Sulamita Aronovsky at the Royal Northern College of Music in Manchester. He also beneﬁtted from occasional study sessions with pianists such as Leon Fleisher and Peter Frankl.

Vovka Ashkenazy made his debut in London at the Barbican Centre in 1983 with the London Symphony Orchestra under Richard Hickox, performing Tchaikovsky’s First Piano Concerto. Since then, his career has taken him all across Europe, and to Australia, New Zealand, Japan and the Americas. He has participated in the Marlboro Festival in Vermont, as well as the Edinburgh and Spoleto festivals. Orchestras he has appeared with include nearly all the major British orchestras as well as the Los Angeles Philharmonic, the Australian Chamber, the Berlin Symphony, the Berne Symphony and the Zürich Tonhalle Orchestras. Conductors he has worked with include his father, Vladimir Ashkenazy, Semyon Bychkov, Martin Fischer-Dieskau and Stanislaw Skrowaczewski, at venues such as the Hollywood Bowl, the Sydney Opera House, the Sala Verdi in Milan, and the Royal Festival Hall, London.
​Vovka Ashkenazy is very active as a chamber musician and has recorded a CD of Italian Music for Clarinet and Piano with Dimitri Ashkenazy, his brother, with whom he toured Japan several times. He has also performed and recorded with his father, Vladimir Ashkenazy, and their recordings for DECCA include Bartók’s Sonata for Two Pianos and Percussion, Rachmaninoff’s Suite for Piano Four Hands, and Schumann’s Andante and Variations for Two Pianos, Two Cellos and Horn.
Further recordings on DECCA with Vladimir Ashkenazy include the 2009 release of a CD with French music for two pianos, and a 2011 release of a two-piano CD entitled Russian Fantasy, which includes transcriptions by Vovka Ashkenazy of Borodin’s Polovetsian Dances, as well as Mussorgsky’s Night on the Bald Mountain. A further two-piano recording, with music by Howard Blake, came out in 2013. Their two-piano concert activities have recently included performances in Italy, Switzerland, Turkey, and the UK, as well as seven tours of the Far East, the most recent being Japan in April/May 2016. Vovka Ashkenazy has also worked together with the Reykjavík Wind Quintet and has released two CDs with this ensemble on the Chandos and the Cryston (Japan) labels.
Vovka Ashkenazy devotes much of his time to teaching. He has given master classes in many countries, including China, Japan, South Korea, Europe and the United States. He was Professor of Piano at the Conservatoire Gabriel Fauré in Angoulême, France, from 1998 until 2007, when he moved to Switzerland. In addition to his post at the International Academy of Imola, he also teaches on the Master of Advanced Studies in Performance and Interpretation at the Conservatory of Italian Switzerland (CSI) in Lugano, and at Kalaidos Musikhochschule in Zürich.
Vovka Ashkenazy has contributed, through performances, to several charitable causes, including Action for Children and Cystic Fibrosis Trust in the UK, Telethon in Switzerland, and the Bridges Peace Foundation in Cambodia and the Philippines. He was made Honorary Artistic Adviser of the Guangzhou Opera House in November 2010, and he is Artistic Director of the Rina Sala Gallo International Piano Competition in Monza, Italy.
He currently resides in Ticino, Switzerland, with his family.